Activism through art and photography has always been a powerful tool for change. Without it, itʼs often difficult to understand the scope of an issue.

If Jacob Riis had never published “How the Other Half Lives” in 1890, it may have taken many more years for the public to realize the horrendous conditions human beings were enduring in the tenements of the Lower East Side. More than likely, Riis couldnʼt sit back any longer and felt he had to do something about what he had witnessed. When flash powder became available, he gathered his assistants and started shooting in the bowels of the slums, literally exposing them. Often surprising his subjects with a bounce of light. This brought change within the next decade that helped to rid the city of child labor, sweatshops and overcrowded, squalid living conditions.

As people with cameras (practically the whole world now has one in their phones), our modus operandi should be to report what we see in the world as itʼs unfolding since we are basically carrying small time capsules. Jacob Riis was a muckraker, known for working as a journalist to expose inhumane conditions, greed, corruption and more. Now, many years later, citizen journalism has changed our media lens and the duty of a muckraker (we are all muckrakers) is to help steer change.

Occupy Wall Street (OWS) has been an eye opener for change. I first heard about this movement in my newsfeed on Facebook when it seemed to be underground and not many people knew about it. My first experience of OWS was seeing a meditation circle right in the heart of Zucotti Park. From that moment I knew something was blooming. It was exhilarating to participate in the next few marches and protests until Bloomberg shut it down and arrests were made. The timing enabled me to carry around this wallet-sized machine and go unnoticed (like a fly on the wall) and give voice to a world in need of a new language. I personally felt a responsibility to capture these historic moments not only as a photographer, but as a citizen actively participating in change. The problems of the world may not have changed but we have. 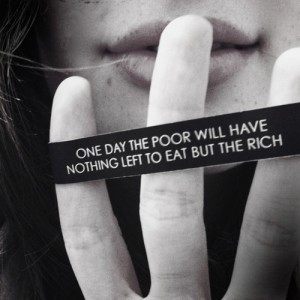 Monsanto, the Trans Pacific Partnership, fracking and countless other issues that are taking over our news-feeds by the day, are exhausting and collectively, we are tired of hearing bad news. Our most recent reprieve from this was the Peopleʼs Climate March in September. With 400,000 people it was the largest march for Climate Change to date. Sadly however, the mainstream media’s reporting of this march was scant. Ironically, we were gathered right in front of the CNN building at Columbus Circle, all 400,000 of us, yet proverbial crickets could be heard from inside CNNʼs HQ. That tells us everything we need to know. There was even a news bite criticizing the march, saying there was an incredible amount of trash left behind. However, Iʼm happy to expose that myth because as I marched down 6th Avenue, near Radio City Music Hall, I personally witnessed volunteers carrying large trash bags and picking up the trash. The report was unfair both to those who were there to march and to those who rely on the media and believed the inaccurate reporting. At its best there is simply not enough coverage of these events and we are left to rely on social media for information. At its worst the mainstream media reporting is biased and we receive filtered news in bits and pieces.

An alternative view is that technology now makes it possible for us to capture and post news events first hand, as they happen and from multiple perspectives so no information is left out. Whether it’s a scene of police brutality or rioting protestors, we can now potentially hold people accountable for their actions. In other words, we can Jacob Riis the hell out of them.

Savannah Spirit
Previous ArticleA Drone Stole My Phone
Next Article Whose Copyright Is It Anyway?